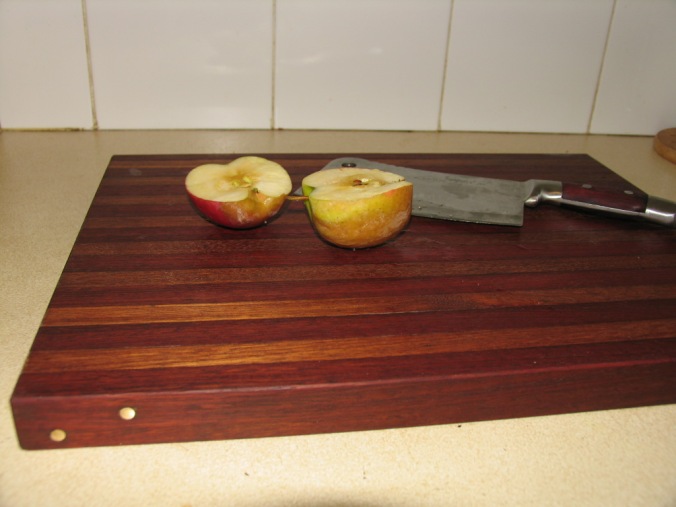 A Chopping Block!
Really?
You’d think I could come up with something better than that for a first post but no.
I’d love to load up pictures of the smoke belching, fire-breathing RG500 in all it’s Barry Sheene glory but sadly the big 2T Suzuki is sitting at the back of the garage in much the same state as 10 years ago. A rolling chassis that’s covered in dust and spread about half-a-dozen boxes.
This Bread-board is the last thing to come off the workbench so it will have to do.

It was made from nothing which is a good place to start. The eldest’s loft bed had seen better days so I pulled it apart. It was junky treated pine anyway but the railing was made out of West Australian Jarrah.
Jarrah is a nice timber. A bit like Mahogany (it used to be called ‘Swan River mahogany’ according to wiki) but is darker and with a more chocolatey red color. Anyway there’s not a lot to a timber plank is there? The sides were already pretty straight so I didn’t have to do much planing to get them flat. It was done with a hand plane so they are not quite perfect which is something I should have spent more time on. You really want to get them butt up next to each other when gluing as any small gap will let water in and over time the joint will fail. 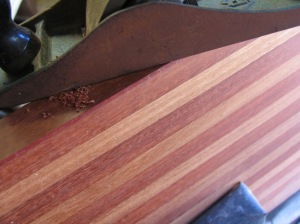 I used a glue called Titebond. It comes in a waterproof version and is pretty much the best stuff on the market. I built a Classical Guitar using it and it’s the defacto glue for anyone who makes wooden instruments, well unless you are a traditionalist in which case it’s horse glue you’d be using (an aside: they actually use cattle hoof/hide to make ‘horse glue’ now).
A mates brother works in timber joinery so he ran the glued up board through his thicknessing machine which saved a lot of time. You get a perfectly flat surface after a pass or two. Now perfect is over rated in my opinion, I like the little imperfections that hand tools throw up but It’s a chopping block – quick & easy eh! No matter which way I laid out the timber I was going to expose the old screw holes. There was no getting away from that. I had a scrap piece of brass rod so I cut off 4 plugs and drilled out the holes so I could tap them in. A quick sand to level the plug ends and tidy it up then time for the finish. You can buy propriety finishes at any hardware store but recommendations via the web were to rub it down with olive oil. However there is, an admittedly slight chance with a vegetable based oil that the finish could go rancid so I went with a mineral oil instead. Obviously it had to be food safe and looking in the drug cupboard I thought why not Paraffin Oil. It’s 2 or 3 dollars a bottle at any supermarket. It’s clear, odorless and made for human consumption (laxative). So a few coats spaced a day apart to let it soak in and it was done. I could have left it there but I was worried about the tiny gaps in a few of the lamination’s. I had some left over Carnauba wax in the garage. It’s a polish extracted from Palm tree leaves. One of its attributes is it can withstand fairly hot temperatures (think car duco) so hopefully won’t wash out with the hot water when you do the dishes. You need to check the label if you buy this and make sure it is the pure stuff and not cut with any additives. Anyway I rubbed in a good coat, a quick buff and it’s sealed it as best I can.
There you go. I can’t think of anything more to say about chopping Blocks.